To celebrate International Women’s Day, an international day of mobilisation, the BNP Paribas Group reiterates its commitments to equality in the workplace and announces its partnership in the HeForShe movement of UN Women France.

The first HeForShe Arts Week took place in New York in March 2016. 1 billion mentions in the media later, UN Women is launching the second edition of the event in Paris and simultaneously in 7 other cities: New York, London, Bangkok, Sao Paulo, Santiago, Reykjavik and Panama City.

HeForShe is a solidarity campaign for gender equality launched by UN Women with the aim of getting men and boys involved in the battle for gender equality and women’s rights. Hundreds of thousands of men around the world, including heads of state, CEOs and international celebrities from all walks of life, have come together to launch large-scale actions in favour of gender equality. This global movement aims to change behaviour, standards and conceptions that contribute to our cultural view of gender. Art is an essential vector to promote equality and change behaviour.

For its 1st year in Paris, the French National Committee for UN Women is organising a series of events from 8 to 15 March in key venues with a host of artists. HeForShe Week will spread to various cultural venues in Paris, mirroring the event that is once again taking place in New York City, as well as in 6 other cities, to amplify and multiply the message of the solidarity campaign for men taking action for equality. 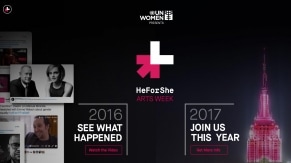 BNP Paribas pursues its actions to promote equality in the workplace

Signatory to the United Nations’ WEP (Women Empowerment Principles) in 2011, the Group has already been conducting a proactive policy of gender equality in the workplace for more than 10 years. This commitment takes the form of signing collective agreements and setting quantitative, closely monitored goals that allow us to measure our progress and the impact of our actions.

*(41.7% according to the rules of the Copé Zimmermann law)

30% has been set as a goal for 2020 ; 24% of all managers on cross-disciplinary executive committees.

On 30 July 2007, we reaffirmed our commitments in this area by signing a new agreement on equal opportunities and treatment for men and women at all stages of their career.

In October 2004, we signed this charter, in which we reaffirm our commitment to fighting all forms of discrimination and promote diversity in our HR processes.

The European Pact for Gender Equality with two European federations, FECEC and UNI

In September 2014, we signed this pact, which covers 23 countries, reaffirming our commitment to equal opportunities in terms of career, remuneration, staff representatives, return from maternity leave and support for women’s networks.

During the #HeForSheArtsWeek from 8 to 15 March 2017, the BNP Paribas Group is holding several events to raise awareness:

BNP Paribas was one of the first banking groups to engage in a policy to prevent discrimination and promote diversity.

You too can support International Women’s Day by expressing your commitment on social networks with #BeBoldForChange!

The history of women in the 20th century

On Wednesday, June 26, members of the Women & Climate Daring Circle sign the G20 Charter for...

BNP Paribas and entrepreneurial women: Highlights of our news since January 2019

For many years, BNP Paribas has actively created a favourable environment for women...

BNP Paribas supports the Women’s Forum Global Meeting, which will be held this year from 20 to...