BNP Paribas and its employees fully committed to help Ukraine

Since the start of the conflict in Ukraine, BNP Paribas, through the commitment of its employees and the actions of its Foundation, has been mobilised to help the people of Ukraine. Overview of the several initiatives which have been set up in Ukraine, in neighbouring countries and elsewhere in Europe.

In Ukraine and throughout Europe, particularly in neighbouring countries such as Poland, Romania and Hungary, BNP Paribas has set up support and solidarity initiatives to help the Ukrainian population. Psychological support hotlines have been set up for employees and their families in the country, as well as a hotline and reception facilities in neighbouring countries.

BNP Paribas Bank Polska has also welcomed nearly a thousand Ukrainian colleagues and their families to its Leszno campus, in Poland, since the conflict began. Near the border with Ukraine, the bank has also reserved 7 hotels with 120 rooms to accommodate refugees. Our subsidiary Arval has lent vehicles to various NGOs in Poland and Hungary to transport goods.

A surge in solidarity was shown by employees throughout the Group, who acted at their own level every day to support the Ukrainian people in neighbouring countries. These spontaneous actions range from hosting refugees to transporting passengers, making basic kits and contributing to the Group’s endowment funds.

For example, the “1 Million hours 2 help” programme deployed at BNP Paribas to enable employees to get involved with charities during their working hours has launched specific campaigns in Germany, Poland and France. Employees are given between 2 and 5 days to volunteer and help Ukrainian refugees.

At the same time, local collections of goods are organised in various European countries. Donation of computers and smartphones in Belgium, Germany and Luxembourg, hygiene and children’s products in France.

UKRSIBBANK teams in Ukraine are ensuring continuity of operations

BNP Paribas’ commercial bank in Ukraine, UKRSIBBANK, is still in operation. This continuity of banking services is key to people’s daily lives and to supporting the country’s economy. ATMs, most of which are still in working order, and bank cards, transfers and wire transfers, are still operational and enabling our customers to continue to access banking services and their funds. Thanks to the mobilisation of the teams including the commercial, operational and IT departments, essential banking services have been maintained, while most UKRSIBBANK branches remain open and accessible wherever possible.

In this exceptional situation, the UKRSIBBANK teams are making every effort to continue supporting their clients. Several actions were taken very quickly: raising card and withdrawal limits, suppression of fees for money transfers to Ukraine, etc. Finally, for Ukrainian cardholders, cash withdrawals are also free of charge at all BNP Paribas Group ATMs.

For Ukrainian refugees needing to open a bank account, the process has been significantly simplified in France, Luxembourg, Germany and Poland. Documents related to the onboarding process have been reduced to what is strictly necessary (a passport and an accommodation certificate) to facilitate access to banking services for refugees   and to offer compassionate, effective support. Similarly, NiCKEL now accepts Ukrainian passports for opening an account in France, Spain and Belgium.

BNP Paribas, part of the wave of solidarity

To date, the Group has made two waves of donations coordinated by the BNP Paribas Foundation to humanitarian organisations helping the Ukrainian population. €10 million was committed to the UN High Commissioner for Refugees, the International Committee of the Red Cross (ICRC) and “Médecins Sans Frontières” (MSF) at the early stage of the conflict. €3 million was made available in early April to support Ukrainian employees who came to Poland and to associations helping refugees in Ukraine, Poland and also in France. These donations are in addition to the initiatives of the Solidarity Fund of BNP Paribas Polska Foundation to provide essential goods, accommodation and transport solutions.

The Group’s Rescue & Recover Fund has been activated and remains open. €3.5 million has been collected, to date, thanks to donations from employees and customers, half of which corresponds to matching payments made by the Group. These funds were donated to the French Red Cross, MSF, CARE and IFAW (International Fund for Animal Welfare). 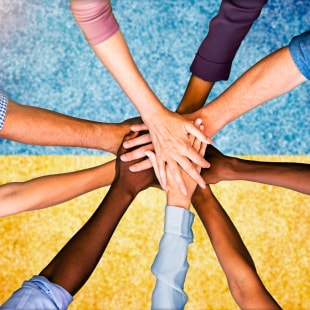 Employees of BNP Paribas can make a donation by clicking here

Keep in touch and receive our newsletter!

Select your topics of interest and frequency of delivery.